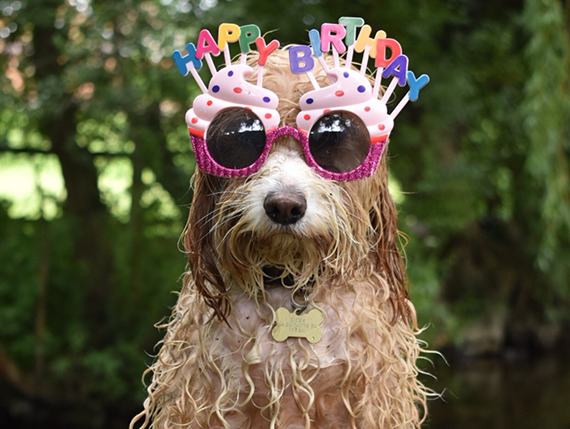 Half of dog owners spend more on birthday presents for their four-legged friend than their own partner, according to new research.

The nationwide poll found that a staggering seven in 10 (70%) of  dog owners celebrate their canine companions’ birthday every single year.

Twenty-two per cent of the owners polled stated their pet’s birthday was one of their favourite days of the year, while 24% claimed it had become even more special since lockdown.

The study by Forthglade natural pet food found the average British dog owner splashed out £62 on their canine’s birthday this year, with 50% not ashamed to admit that they always spent more on their dog than their partner’s birthday.

A further 28% admit that, although they don’t spend more on their dog’s birthday, secretly they would love to indulge them. Little wonder then that three-quarters (73%) claim their canine companion is their ‘soulmate’.

And when it comes to who spends the most on their pet’s birthdays, under 30s really roll out the red carpet, splashing £70 on their hound. This compares with the over 60s, who spend just £19 on their four-legged friend.

More than half (54%) of the nation’s canine companions will receive new toys for their birthday this year, while 39% will sit down to enjoy a gourmet meal, either handmade by their owner or bought in, especially. A third (33%) of dogs will receive a new collar, 29% will start the day with a deluxe birthday breakfast, 31% will listen to their owner sing ‘happy birthday’ to them, and 27% will tuck into a dog-friendly birthday cake.

Eighteen per cent of dogs will receive a birthday card on their special day this year, while two in five (40%) will be taken on an extra-long walk as a special treat. And later in the evening, 44% will enjoy extra cuddles on the sofa, before settling down to watch a favourite dog themed film such as ‘Lassie’ or ‘101 Dalmatians’ (11%)!

The research found that if lockdown restrictions are lifted, more than one in 10 (13%) of canines will be taken to meet their dog pals in the local park for a birthday walk. And the study found that 53% of owners admit they dream about one day hosting a lavish party for their dog and its four-legged friends – if money were no object.

To celebrate doggy milestones across the country and 50 years of making natural recipes for canine companions, Forthglade has launched a Limited-Edition Sardines & haddock, potato and broccoli birthday meal.

Joint managing director of Forthglade Gerard Lovell said: “It’s no surprise to hear people enjoy making their dogs feel extra special, especially during a year where relationships with our beloved dogs have proven so valuable and appreciated by so many.

“We hope our limited-edition birthday recipe will be the icing on the cake for many dogs enjoying extra TLC. Making this special meal seemed the perfect way to recognise our 50-year history making natural dog food for the nation’s canine companions.”