A garden centre manager has written a children’s book – inspired by the livestock in the pet and aquatics department.

The book – by Chris Dartnell, who runs Squire’s Garden Centre, in Washington, West Sussex – is called ‘Most animals like to…’. It is illustrated by his colleague, Helz Cuppleditch.

The book is aimed at children aged 3-5, and is about animals who have fun yet unusual habits that are reflected in their names, so there’s Cheddar the mouse, Howler the dog, Chippy the seagull and Suds the cat, to name but a few.

The book is £4.99 and is available to buy now at Squire’s in Washington.

Author Chris Dartnell, who is from East Sussex, is a man of many talents. As well as writing his first book he has a passion for horticulture, and has been manager of the Washington garden centre for nine years. He is also an accomplished drummer and has played with many bands, including local favourite The Reform Club with whom he has released two albums.

He said: “I was inspired to write this book when I saw my cat drinking from the sink tap one day, and I thought it would be fun to write about the unusual habits that animals have.

“Some of my inspiration also came from the Pets & Aquatics department at Squire’s in Washington as we have a great selection of furry animals as well as reptiles and fish. It’s very exciting to see my book for sale at Squire’s. Massive thanks go to my colleague Helz Cuppleditch, who did all the beautiful illustrations in the book which really brings it to life.” 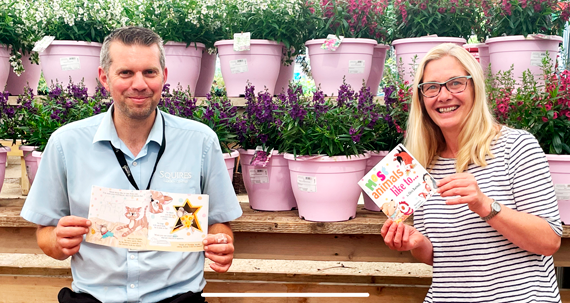