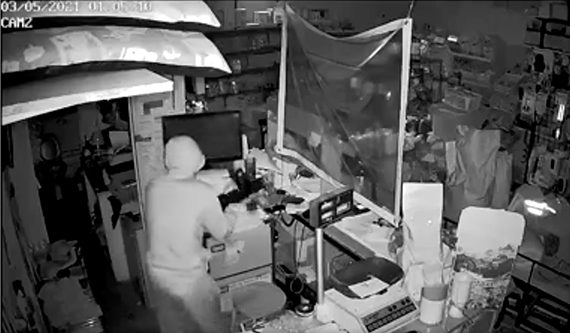 A village pet shop has been hit by burglars who stole £100 in cash from the till during the break-in.

The incident happened over the May bank holiday, when thieves forced their way into Oxbutts Pet and Stable Supplies in the Gloucestershire village of Woodmancote, near Cheltenham.

Manager Peter Ilnicki, who runs the shop with his wife Marta, said he first realised the shop had been broken into when the building alarm went off, automatically sending an alert to his phone.
“It was really upsetting for both of us and came as a big shock,” Peter said. “But the local community have been fantastic with messages of support and help.

“Some customers have also donated cash to provide a float for the till. That’s a remarkable gesture and sums up the local community spirit.”

CCTV shows thieves trying to enter the shop for around 45 minutes, trying the back entrance for some time before forcing entry through the front.

“There were two youths caught on camera,” added Peter. “They were hooded and wearing masks and sunglasses.”

A spokesperson for Gloucestershire Constabulary said: “Police were called just after midnight on bank holiday Monday (May 3) to a report of a break in at a shop in Cheltenham.

“Officers were called after a shop alarm sounded at a store on the Oxbutts industrial estate in Woodmancote, Cheltenham.

“Unknown offenders had forced entry and stolen cash. A police investigation is ongoing.

“Officers are asking anyone who may have seen anybody acting suspiciously in the area around the time, or has CCTV or dashcam footage of the area to get in contact by calling 101 quoting incident 6 of May 3.”