Poo problem is no picnic 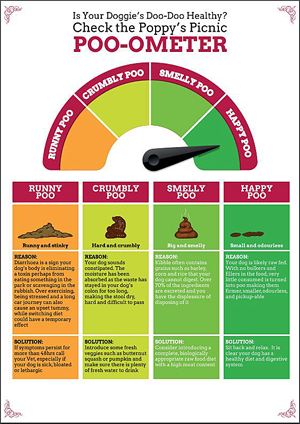 That’s a mountain of poo almost the size of Uluru (previously Ayers Rock) every year.

This poo ‘mountain’ – the size of Uluru (Ayers Rock) – could be made smaller, Poppy’s Picnic says, and to help the nation’s dog owners determine whether a dog’s digestive system is healthy, the company has released a new downloadable ‘poo-ometer’.

Canine nutritionist Anna Webb said: “We know for ourselves that what we eat affects our health and toilet habits, but many don’t make the link between diet and doggy doo-doo. What goes in one end very much determines what comes out of the other.

“Dogs are carnivores with short digestive tracts and need a high meat content diet to thrive. Many highly-processed pet foods contain as little as 4% meat and are bulked with grains and fillers that you and I can digest, but dogs can’t. When a dog is absorbing all the goodness they need from natural high protein food, their poo becomes smaller, firmer and odourless.”

Dylan Watkins, founder of Poppy’s Picnic, said: “Picking up after your dog is something many dog owners argue over. It’s seen as an unpleasant job that many dread, but that needn’t be the case. Dogs fed a biologically-appropriate raw food diet absorb all the goodness from their food, meaning their poo is small, hard and easy to pick up. Because there’s no odour attached to it either, picking it up is not a stomach-churning ordeal. Simple diet changes can make a huge difference.”

Research by Poppy’s Picnic’s shows that nearly half of Brits (44%) say that they or a family member have stepped in dog poo in the last year. Fifty-six per cent think the amount of ‘squelch’ on the streets has increased and would go as far as describing the pavements as ‘treacherous’, and a whopping 74% think owners that fail to pick up after their dog should be fined, 46% think they should be named and shamed and 10% think irresponsible owners should go to prison for the offence.

Poppy’s Picnic hopes its Poo-ometer will help the nation to take the faeces issue more seriously and help to inform owners of the simple switches they can make to see a difference in their dog’s health.