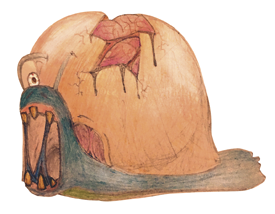 A video of a creature being called a ‘zombie snail’ has gone viral on Twitter.

Mike Inouye posted the clip, which shows a snail whose motor functions and eyestalks have been taken over by a parasitic flatworm, reported the Mirror.

He said a parasitic worm, leucochloridium, had invaded the snail, taking over its motor functions and eyestalks such that its movements mimicked a caterpiller that birds eat.

He said: “The worm can then reproduce in the bird’s GI tract, eventually transmitting via its faeces.”

Many people were freaked out, while also being a little bit in awe of nature.

One person tweeted: “This is deeply, deeply horrifying and amazing and cool. Thank you for sharing it even though it makes me want to scream!”