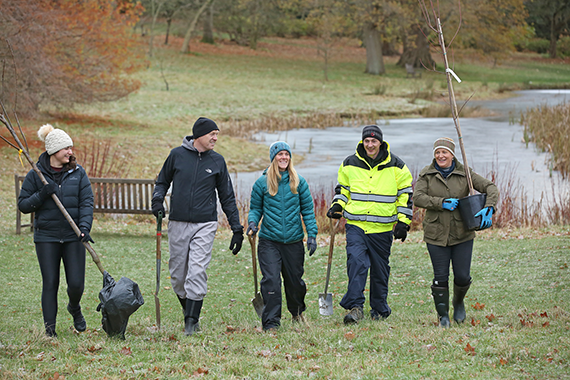 Inspired Pet Nutrition, the company behind the Harringtons and Wagg pet food brands, is supporting National Tree Planting Week by planting 100 trees at the Thorp Perrow Arboretum in North Yorkshire.

As part of IPN’s overall target of planting one million trees, the business is also planting a tree for every employee to help offset the carbon footprint of the whole workforce.

Volunteers from IPN planted the trees, which included Red List species such as Horse Chestnut.

Thorp Perrow’s Curator, Faith Douglas, oversaw the IPN tree planting to add the 100 trees to the existing collection comprising of over 4,500 trees and plants, including five national plant collections.

A year ago, IPN launched its Positive Pawprint project with the target of becoming the UK’s most sustainable pet food business. It is already the UK’s first major pet food manufacturer to become carbon negative – having been accredited as achieving this status by Carbon Footprint Ltd.

As part of Positive Pawprint, IPN committed to planting one million trees and teamed up with Ecologi, an environmental organisation helping to reduce global greenhouse gases by planting trees and which has already planted more than 26 million trees worldwide.

IPN is planting a tree for every order placed on the Harringtons website in October and November, and to date has planted more than 27,000 trees. Starting in December, a tree will also be planted for every new online subscriber.

IPN marketing director Chris Wragg, who was one of the volunteers, said: “We have a vision to become the UK’s most sustainable pet care business.  Tree planting, our carbon negative status and our commitment to off-set the carbon footprint of every employee are proving to be critically important, both to consumers but also to potential new employees as we recruit into our fast- growing business.”

Sir Henry Ropner, owner of Thorp Perrow Arboretum, added: “I am delighted to be supporting National Tree Planting Week and this joint initiative with IPN will ensure a safe future for some of the UK’s most endangered tree species and make a significant contribution to biodiversity in the area.”