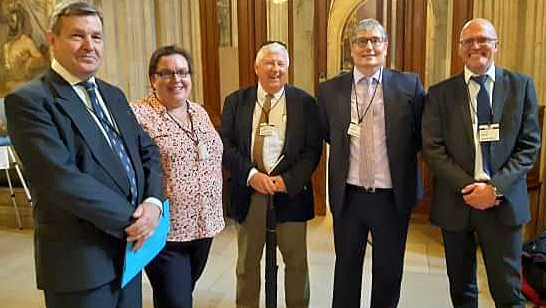 The Companion Animal Sector Council is being resurrected after a meeting in the House of Lords.

The meeting last week was hosted by Lord Sandy Trees, supported by the Government’s Animal Health and Welfare Board for England and assisted by aquatic and herptile trade bodies OATA and REPTA. The meeting brought together a wide range of organisations interested in animal welfare, which overwhelmingly supported the need for the group.

The meeting was attended by representatives from the pet trade, the keeping community, welfare charities, vets, regulators and the education sector, who all expressed their support for re-establishing the group, which will provide a voice in government for organisations interested in the welfare of companion animals (other than dogs, cats and horses, which have their own groups).

Lord Alexander Trees said: “I am delighted to see the overwhelming support to reinvigorate this group from across such a diversity of interests which demonstrates the strong desire across all groups to ensure good welfare for animals in the UK.”

OATA chief executive Dominic Whitmee said: “The reinvigoration of this group provides a unique opportunity to provide advice and support to Government and Parliamentarians on matters relating to the health and welfare of companion animals. Sector Councils are important independent sounding boards, which can give expert, specialist advice and opinion to help inform Government policy and law.”

Representatives at the meeting unanimously supported the appointment of well-known vet Michael Stanford as chair.

Mike, a recent past president of the British Veterinary Zoological Society, said: “I am honoured to be appointed as Chair of this important group and would encourage all those organisations with an interest in the health and welfare of companion animals to consider how they might contribute to its success.”

Mike will be supported by Dave Perry, trustee of The Pet Charity and long-time animal keeper, who was appointed deputy chair.

A major stakeholder event will be held later in the year bringing together interested groups to explore areas of common interest and how the group will work in the future.