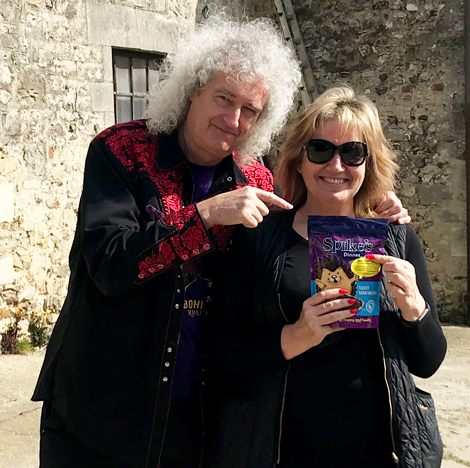 Spike’s Hedgehog Food has formed a partnership with Amazing Grace, an initiative led by Brian May’s charity, the Save Me Trust.

Amazing Grace, a collaboration between the Save Me Trust, Harper Asprey Wildlife Rescue and the British Hedgehog Preservation Society, is fighting the declining population of hedgehogs in the UK, and, as of yesterday (April 1), 10p from every bag of Spike’s food sold will be given to the campaign.
.
Through the partnership, each donation will help Amazing Grace spread the message and help educate the public about the decline in population of hedgehogs in the UK, which has dropped from 30 million in the 1950s, to fewer than one million today.

Anne Brummer, CEO of the Save Me Trust, said: “The UK’s hedgehog population is declining at an alarming rate and we’re passionately dedicated to doing everything we can to help the humble hog to survive and flourish.

“Their habitat has decreased massively over the last 30 years and the decline in hedgehogs has mirrored that. The Amazing Grace campaign tackles these issues on every level from educating the public, to carrying out scientific studies.

“We want to make gardens and outdoor spaces hedgehog-friendly throughout the UK. It’s not too late and it’s within our gift to change the fate of Britain’s favourite mammal if we all pull together.

“We are very excited to be working with the wonderful people from Spike’s; any support we receive is a step in the right direction and this partnership with Spikes’ will play a vital role in our mission to increase the hedgehog population.”

Brian May added: “We welcome Spike’s generous boost to the campaign to save these precious native animals from extinction. Everybody loves the small hogs, who are part of our heritage and we’d like to see the whole of Britain get behind this campaign.”

Camille Ashforth, Spike’s World brand manager, concluded: “Everything the team at Amazing Grace does is so important. They’re not only helping and rehabilitating a declining population of hedgehogs, but also raising awareness of how we, as the general public, can help by making our gardens hedgehog friendly – something we’re really proud to stand behind.”