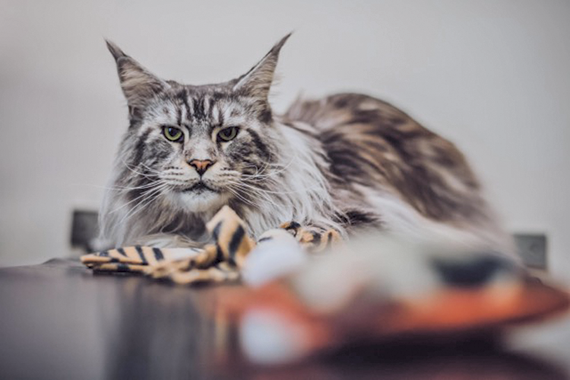 A cat has been saved by vets after swallowing some sewing thread.

The Maine Coon cat, Sir Dexter Purrbody, had ‘seam-ingly’ taken to owner Sandra Hamand’s sewing machine and munched the thread from a reel.

Sandra, who lives in Biddulph, Staffordshire, said: “I knew there was something wrong when he wouldn’t eat his chicken, prawns and raw mince.

“I took him to the vets and they said he was dehydrated and they wanted to keep him in for a few days.”
Carole Potter, of Charter Vets, part of Willows Veterinary Group, said:
“I decided to explore further by operating and that’s when I discovered that his small intestine had concertinaed like a hair scrunchie.

“He’d swallowed lots of thread and we found some still wrapped around his tongue which was stopping it from passing through.”

Sandra, who now takes extra care to make sure her cotton is out of claw’s reach, said: “He is doing fine now. He’s as bright as a button.”