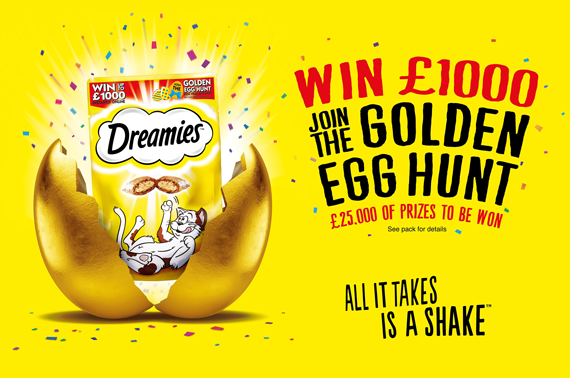 For every pack of Pedigree Dentastix, shoppers will be able to claim a free SelfieSTIX online and enter a competition to win £1,000.

The promotion is intended to drive trade-up to bigger packs and promote a daily dental care regime. The campaign runs until July 1.

For cat owners, Dreamies is also running an on-pack promotion and encouraging consumers with the ‘Golden Egg’ activation. The promotion gives owners the chance to win some instant cash prizes comprising four £1,000 prizes, 100 x £100, plus a chance to win £1,000 in a prize draw.

As well as the in-store displays for the Golden Egg Hunt, there is also online video advertising across social media platforms.

The Dreamies Golden Egg Hunt promotion runs until May 19.