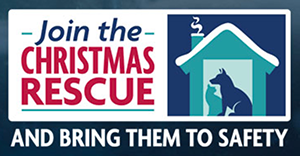 The RSPCA has launched a Christmas appeal for help as the charity is braced for a surge of abandoned and neglected animals as pet ownership soared during lockdown.

Last December the RSPCA received one call every minute, one report of an abandoned animal every hour, and took 70 rescue animals into RSPCA care every day despite England and Wales having strict restrictions in place.

During the pandemic, pet ownership has surged with estimates of more than 3.2m people taking on new pets. With the return to work, the end of furlough and a rise in energy bills, the RSPCA fears the increased stress and pressures will see an increase in abandonment, neglect and even abuse of animals.

In Tyne and Wear there were 57 reports of animals being abandoned last winter, including 24 in December.

Animal abandonment levels have risen to almost pre-pandemic levels and the charity fears this festive season could be even busier.

Dermot Murphy, who heads the RSPCA frontline rescue teams, said officers will be saving animals across England and Wales throughout the festive season, including Christmas Day.

“Our frontline rescue teams are braced for the worst this Christmas. We usually see two types of pet abandonment at Christmas and both are heartbreaking.

“Every year we get reports of people leaving their pets while they visit family and friends. This year is a four-day holiday and many people will want to make-up for not being able to see family and friends so some animals will be left for days on their own to fend for themselves.

“It’s not acceptable to simply leave extra food and water for most pets if you are going away.”

Dermot added: “It’s a sad reality that some pets will be turned out on the streets this Christmas and we are braced for even more of that happening as the bills are rising, there are presents to buy or the commitment needed to own a pet becomes too much.”

Last year the RSPCA received over 50,000 calls to its animal rescue line over the Christmas period.

Calls to the RSPCA’s emergency rescue line passed pre-Covid levels for the first time in September showing return to normality and, with it, rising concerns about the welfare of animals.