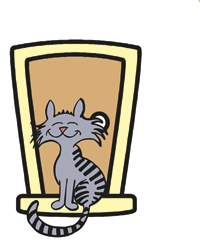 A video of a cat apparently knocking on a door has been viewed online more than 20 million times.

The black cat is seen repeatedly knocking on the door of its owner’s house as it waits to be let in, in a video posted on Facebook.
It perches on a metal handrail before flicking the doorknocker four times.
The persistent puss then waits patiently to be let in with its paws resting on the door handle, but when the door remains shut (perhaps because the homeowner was asleep, as it was 6am!), the cat knocks again.
The animal then waits again before trying for a final time, but with no success, reports the Daily Mail.
Sheekilah Jones, who filmed the video, wrote in her Facebook post: “I’m either seeing things because it’s 6am or this cat is actually knocking the door?”
Share. Facebook Twitter LinkedIn Email
Previous ArticleShopper has the hump
Next Article Industry Profile: Benyfit Natural – Reaping the Benyfit