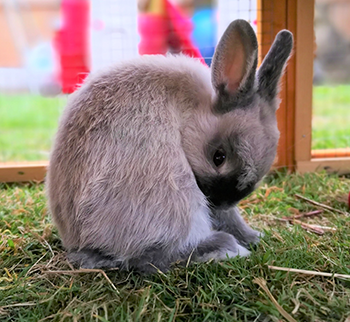 Hundreds of thousands of rabbits are facing a lifetime of endless isolation and loneliness, says leading veterinary charity PDSA.

Despite being incredibly social animals, PDSA’s Animal Wellbeing (PAW) Report found that half (49%) of all UK rabbits live alone (equating to around 440,000 rabbits) and a quarter (25%, around 230,000 rabbits) are kept in inadequate housing conditions, such as cramped hutches.

The charity is raising awareness of pet rabbit welfare during Rabbit Awareness Week, which started on August 10.

PDSA vet Lynne James said: “Worryingly, PDSA’s Report also found that over a 24-hour period, rabbits spend an average of 11 hours inside their hutch. Sadly, one-in-ten (10%) rabbits don’t have a run, living their lives in a hutch, and a further one-in-ten (11%) rabbits don’t even have enough room in their runs to hop.

“During lockdown, many of us will have experienced feelings of isolation, boredom and loneliness. But while we can begin to ease out of lockdown into a new kind of normality, our PAW Report findings show the sad reality that thousands of rabbits will continue to face perpetual confinement, enduring inadequate spaces and a lack of companionship, which can cause immense suffering.

“Our research shows that 98% of rabbit owners said that their pet was loved, so it may be that most of the time owners are misunderstanding their pets’ needs as opposed to any intentional mistreatment.

“Rabbits are very social animals and need another cotton-tailed friend to be happy so it’s incredibly concerning that 65% of owners disagree that their rabbit is lonely. Rabbits should always be homed with one other carefully introduced bunny in a large enriching space.

“Whether they’re kept inside or outdoors, the more space you can give your rabbits, the better! Your rabbits’ homes should provide more than enough room for them to lie down, stretch out, stand on their back legs without their ears touching the top and should be long enough for them have a little sprint.

“It’s never too late to improve the quality of life for the nation’s rabbits – there is plenty of advice out there, including on PDSA’s website, or speak to your vet for guidance.”

During Rabbit Awareness Week, alongside other animal charities and welfare organisations, PDSA is urging owners to ensure their bunnies are happy and healthy by checking their five welfare needs are met – environment, companionship, health, diet and behaviour.