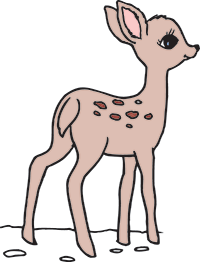 RSPCA chief inspector Simon Parker was at home enjoying a birthday barbecue with his family when he was called out to Mansfield Police Station in Nottinghamshire.

A female roe deer had been picked up on CCTV after somehow getting into the police compound – which is surrounded by 6ft fences, with gates that only open when vehicles go in and out!

He and a vet managed to dart the deer and move her to the nearby woods and releasing her.