Kittens have a crush on rescuer 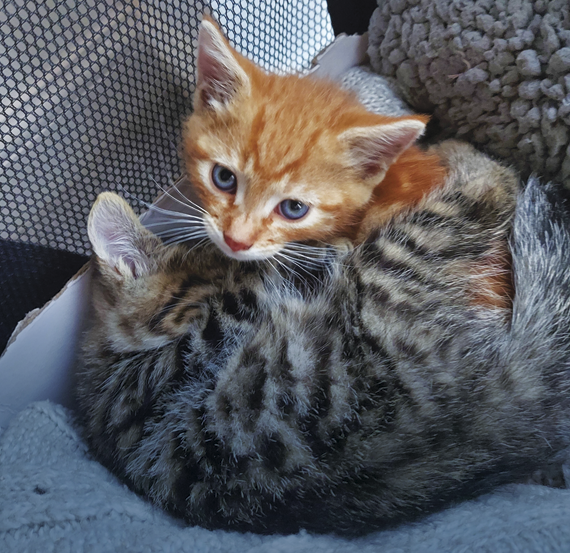 A quick-thinking couple from Wokingham have saved two kittens that were just minutes away from being crushed to death after discovering them trapped inside the engine of a car in a scrap yard.

Tommy Harper – who works at the scrap yard – and Charlotte Drablow have now adopted the kittens and named them Garfield and Odie.

Tommy said: “We crush hundreds of cars every day and line all of them up ready for the crusher. As I walked past the cars waiting to enter the crusher, I heard an unusual noise coming from one of the vehicles. I soon realised it was meowing and opened the bonnet of an old Ford Mondeo.

“I could see a tiny grey tabby kitten and further down inside the engine was another ginger tabby kitten that was well and truly stuck! The grey kitten was really stressed and hissing a lot, I think he was trying to protect his mate. I rang my partner and asked her to come straight down to help.

“Both the kittens were tiny and looked really ill…Both were hissing at us as they were obviously very frightened. We looked everywhere to see if there were any other kittens in the other cars and hoped we might find the mum, but it was just the two of them.”

Charlotte headed straight to Harrison Family Vets at The Point on Shepherds Hill in Woodley so they could be checked over, where the team, after diagnosing the kittens with cat flu, supplied antibiotics, eye ointment and worm and flea treatments free of charge.

Charlotte said: “I think they have a bit of a crush on me now as they follow me all around the house. They are like a pair of little ducklings and treat me as their mum!”