Cool for cats the top ten places to welcome felines 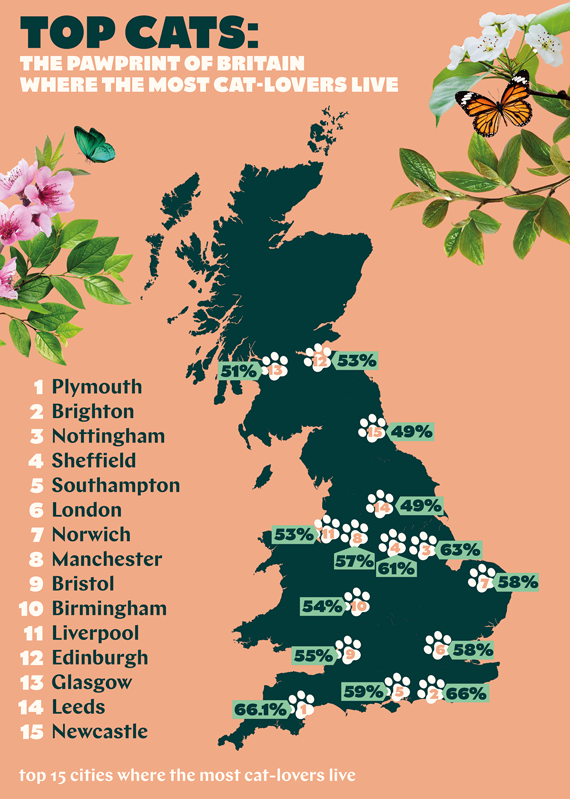 The historic naval city of Plymouth has piped the genteel south coast seaside town of Brighton by a whisker to claim the title of ‘cat capital’ of Britain, it has emerged.

Researchers who carried out a detailed study found two thirds (66.1%) of people who live in Plymouth are self-confessed cat lovers.

Legend has it Sir Francis Drake, who famously contemplated the threatened Spanish invasion while playing bowls on Plymouth Hoe in 1588, once rescued a cat from the sea and adopted it.

Plymouth just beat Brighton, which is well known for its vibrant LGBTQ community, to make top spot, with Nottingham third and Sheffield fourth.

Overall the top ten was made up entirely of English cities, many, south of Birmingham, which shows cats may be shedding their title as ‘underdogs’ south of the border.

The trend emerged from a study of 2000 UK Britons, which also revealed cats have finally won the hearts of the male population, with many men following in the footsteps of celebrities such as Russell Brand and Ed Sheeran, by having a cat.

While that domain used to belong firmly to dogs, cats are clawing their way back with as many men (17%) as women (17%) now considering themselves ‘cat lovers’.

The research was released days after figures published by the Association of Dogs and Cats Homes revealed felines were twice as likely to have been abandoned by their owners during lockdown.

Rachel Andre, CEO for cat litter firm, Natusan, said: “It’s sad to hear the nation’s cats have had a raw deal during lockdown, especially as we know there are a strong contingent of responsible cat lovers and pet parents around the country who go the extra mile in putting their felines first.”

Overall one in six (17%) of those who took part said they were cat lovers, compared to one in three (33%) who claimed to be dog lovers. Another one in three (31%) said they loved both cats and dogs equally.

And the increasing role cats are playing in our lives was laid bare in the  Natusan research.

Around one in four cat-lovers went as far as to claim their pet is their best friend (24%) and one in three admitted their cat helps them during tough times (35%), such as the current covid-19 pandemic.

One in five revealed their feline companion is ‘more loyal’ to them than anyone they know (23%) and a similar number said their cat ‘understands’ them (22 %).

It also emerged more than one in ten (12%) think cats’ bad reputation is unjust and that they get a raw deal.

British pet behaviourist Professor Peter Neville said: “Our feline friends can often come up against a bit of stick for being aloof and free-spirited, so it’s important to shine a light on their compassionate nature.

“The number of cat pets has been growing faster than the rate of dogs over the last decade, proving cats may not be the ‘underdogs’ for much longer.

“The fact they can be left alone for longer periods of time than dogs and are happy to shower their owners with unconditional love earns them big brownie points.”