A new report developed by the Office for National Statistics reveals that online pet food prices have increased during the coronavirus crisis.

The ‘Coronavirus, the UK economy and society – faster indicators’ report is the first one looking at high-demand online sales and how these have been impacted by consumer demand during the pandemic.

The report – released yesterday (April 2) – was the first of a new weekly series that will contain data and indicators about the state of the economy during the crisis. One of two new indicators is a ‘high demand products’ (HDP) basket, which looks at goods that have been in high demand since widespread understanding of a likely shutdown in mid-March.

The HDP basket includes everyday essential items that are currently in high consumer demand, including products such as toilet roll, antibacterial wipes, Paracetamol – and pet food.

The online prices for these goods were compared between week one (March 16-22) and week two (March 23- 29). The average increase between the two weeks was 1.1% – however pet food showed the second highest increase across the two weeks at 3.1%, an increase higher even than Paracetamol, which rose by 2.8%.

This has led to allegations by some of profiteering. The Prime Minister, Boris Johnson, warned last month that shops would face ‘significant’ fines if they were deemed to have hiked prices unfairly, saying: “I do not want to see people profiteering, people exploiting people’s need at a critical time.” 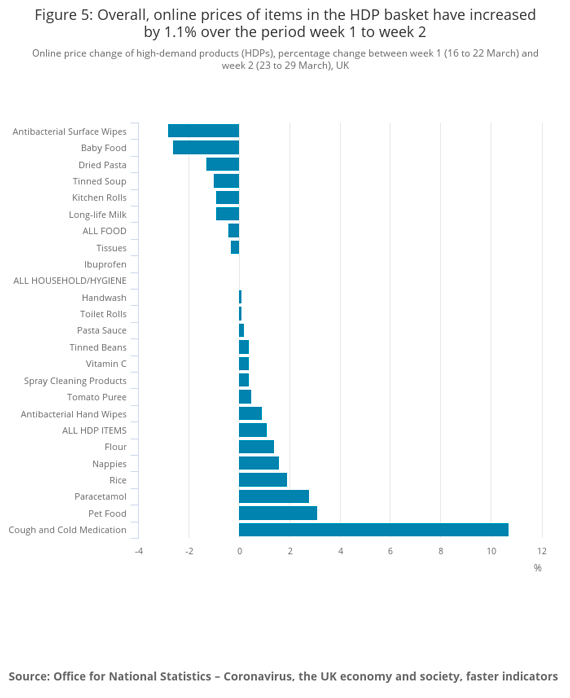