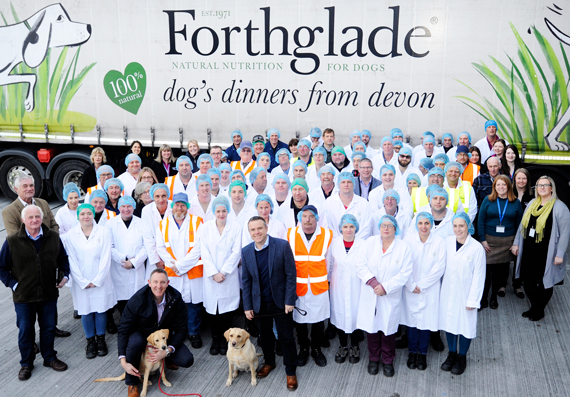 Natural pet food brand Forthglade increased sales by 21% for the year ended September 30, 2018, in accounts soon to be filed at Companies House.

Forthglade’s joint MDs, Chris Brooking and Gerard Lovell, both with a background in food production, took over the once-struggling business in 2011. Together with specialist consumer brands investor Piper (which invested £6m into Forthglade in 2015), Santander Growth Capital (which funded £5m towards the new factory) and chairman Peter Farquhar, they have transformed the brand, increasing production fourfold and creating an additional 71 jobs.

Today, Forthglade’s 100% natural dog food can be found in all the main supermarkets, as well as UK pet shops and online. The brand is currently sold in 11 countries worldwide, with recent launches in Italy, Spain and Finland.

In September last year, Forthglade relocated to a purpose-built 70,000 sq ft factory next to Dartmoor National Park. The new factory significantly increases production capacity, and sales for the first six months of operations are already up by 24% on the same period last year. The brand is also set to increase its 130-strong local production team to 150 staff over the coming years.

Gerard Lovell said: ‘We’re delighted by another strong year of growth and particularly excited for the future now that we’ve begun settling into our new Okehampton home. We’ve already had a fantastic start and look forward to continued and sustained growth as we bring Forthglade’s premium natural meals and treats to dogs and families in the UK and beyond.”