Man jailed after paying £3K to have puppies’ ears cropped 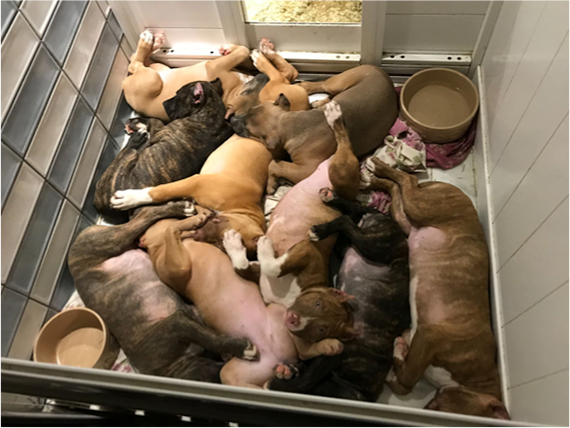 A man has been jailed for permitting the cropping of his nine puppies’ ears.

Adam Malik, 29, of Alcove Road, Bristol, appeared at the magistrates’ court on Thursday (May 6) to be sentenced. He had pleaded guilty in March to one offence under the Animal Welfare Act 2006.

On January 6, 2021, RSPCA inspector Kimily Walters visited a home address in Bristol after a report from a member of the public with concerns about the welfare of a number of dogs at the property and reporting that a litter of puppies had had their ears cropped.

Kimily said: “I attended the home with police and Malik invited us inside. In one room of the outhouse there was a litter of nine 15-week-old bull breed puppies. They were all fast asleep, piled on top of each other in a makeshift kennel area. It was clean and tidy and the puppies appeared in good condition but had all had their ears cropped. Their ears were red, crusty and had not yet healed.

“He told me he had bred the puppies and that he owned their mother, Xena, and father, Pablo. Both dogs were outside along with a third, an eight-month-old called Skittles, who he explained he’d also bred. Pablo also had cropped ears and Malik explained that he’d been cropped before buying him and importing him from overseas.”

Another bitch and her 12 four-week-old puppies were being kept in a shower cubicle. Police seized all 13 dogs as well as Skittles and took them in.

In interview, Malik admitted that he had arranged for someone to come to his home, take the puppies away and crop their ears. He said he paid £3,000 for all nine pups to be cropped.

The court heard that he intended to sell the puppies and that they’d received no pain relief after the procedures until they were taken into RSPCA care around three weeks later.

In court he admitted to permitting the puppies’ ears to be cropped, an offence under the Animal Welfare Act. He was sentenced to 14 weeks custody and was disqualified from keeping dogs for 15 years.

Sentencing Malik, magistrates said: “You arranged for the puppies to be cropped through someone you didn’t know… [they] were given no pain relief. The puppies continued to suffer pain and wound infection and you must have known they were suffering and they continued to suffer. They saw no vet  and it was all for commercial gain. You have no licence to breed these dogs. We can only order custody as the offence is so serious.”

The nine puppies taken into RSPCA care are now all in foster homes. Their foster families will now be able to adopt them.

Kimily added: “Many of these pups have had ongoing problems caused by their cropped ears, including recurrent infections. One, Zeus, needed an operation because two of the staples, used to seal the wound after the procedure, had become embedded inside his right ear.

“Thankfully they’re all now in wonderful foster homes and, hopefully, in time, they’ll be able to forget about the awful experience they endured all in the name of looks.”

Reports to the RSPCA of ear cropping, which is done for cosmetic purposesg have surged 621% in the last six years and the charity is working with other organisations in an attempt to crackdown on this trend.