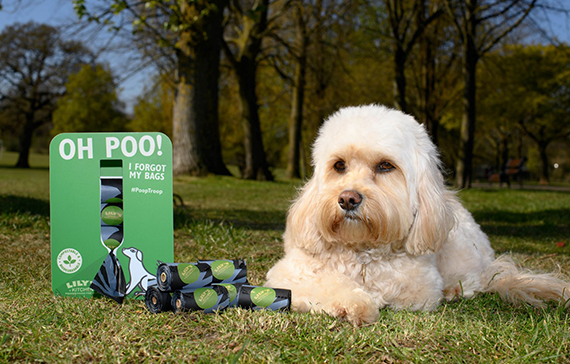 A massive 64% of 2,000 respondents to new research say dog waste has become an increasing issue in their area.

And nearly a third (31%) of dog owners that took part in the survey – commissioned by Lily’s Kitchen – confessed to NOT cleaning up after their pups, saying they thought poo bags were ‘wasteful’ because they couldn’t be recycled.

So the award-winning pet food producer says it is taking a stand and launched a new clean-up campaign on Thursday (May 6). ‘Poop Troop’ is a community initiative that promotes ‘responsible pet parenting by facilitating a way for dog owners to pick up their pooch’s poo in the most sustainable way possible’.

The pet brand has placed pop-up poo bag dispensers in dog walking hot-spots to prevent the problem getting worse.

Located in some of the UK’s worst-offending areas, the dispensers contain the brand’s new Planet Friendly Poo Bags to help tackle the crisis and give pet parents a sustainable solution to disposing their pets’ waste.

Data from the survey suggests that London is the worst region for leaving stools on the street, with nearly three-quarters of residents (73%) saying it was a problem.

But it isn’t just the rise in poo left on pavements that is a cause for concern, Lily’s Kitchen says, it is the number of plastic bags used to dispose of dogs’ waste.

With 8.5 million dogs now in the UK, an estimated 5.5 BILLION poo bags are used each year, with many pet owners not opting for products that tread carefully on the planet.

As “¯a B Corp that aims to put pets, “¯people, “¯and the planet at the heart of everything it does, “¯Lily’s Kitchen has launched its environmentally-friendly poo bags “¯so that pet parents can clean up after their “¯puppers, guilt-free.

Made using renewable plant-based resources, the bags are fully compostable and biodegradable so that “¯they will break down completely. “¯ “¯

Samantha Crossley, marketing director at “¯Lily’s Kitchen, said: “¯”Being a force for good “¯is important to us “¯at Lily’s Kitchen. We wanted to make sure that our “¯poo bags “¯not only serve a very important purpose for pet parents, but also tread lightly on the planet. “¯ “¯

“By “¯offering our Planet Friendly Poo Bags to communities through our ‘Poop Troop’ “¯dispensers, we’re hoping to tackle the huge problem of “¯poo being left on Britain’s pavements – waiting for people to step in.

“We hope to show, not just tell, dog owners that there is a sustainable way to dispose of your pup’s poop.”