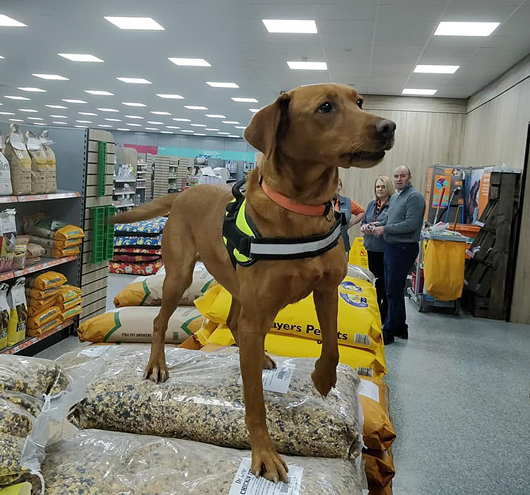 A pet store and park complex is helping an international detection dog business in the war against drugs and terrorism.

Specialist instructor David Scott and his team use PetPlace’s new-look Abergele facility – including the park, coffee bar and cinema – to train the dogs and provide them with myriad distractions during the search process.

David, a former member of the RAF police, has worked in Kosovo, Bosnia, Iraq, Kuwait and other war-torn countries in a 30-year career as a dog handler.

He says PetPlace is unique and an ‘amazing facility’ that provides the perfect setting to sharpen the senses of these talented animals.

“The dogs are training in among the dog food and treats and toys; there are so many distractions and obstacles to them successfully sniffing out the target scent,” he said.
“If they can find what they’re looking for with all of that going on around them, then they can find it anywhere.”

More than 25% of Wagtail dogs are unwanted pets or from rescue centres and the company commonly uses Labradors, springer spaniels and any working dog breed that has the intelligence, drive and determination needed for the job.

“It’s been particularly interesting holding demonstrations with PetPlace, where the public can see how we do it and how quickly the dogs are able to recover the substances,” David continued. “We have to keep it real and there have to be as many other ‘live’ scents around as possible to make training extra difficult.

“I’ve never come across another facility like this in the UK; it’s unique in the way dogs can interact in a social environment that is safe and controlled but also fun for them,” he said.
“In 30 years, I’ve never stopped learning and I’ve learnt a lot from PetPlace in the short time we’ve been working together.

“The dogs can integrate as individuals and the park is just fantastic; I’ve never seen anything like it before. It’s perfect for dog lovers, for dog people who want their pet to be grounded and socially accepted while having a cup of coffee and making new friends.

“I applaud them on what they’ve done at Abergele and look forward to working with them for many years to come.”

David’s words followed praise from pet psychologist Roger Mugford, who recently lauded managing director Sion Pritchard and his staff for ‘leading the world’ in supporting pets and their owners with an ‘outstanding’ social space at Abergele, which will also be rolled out to the firm’s other stores in Llangefni, Mold, Chirk and Ruthin.

Sion said: “To have such feedback is extremely heartening, and to be able to help a renowned company such as Wagtail in training these dogs and the handlers themselves is a source of pride for us all.

“The work they do is vital for the military and emergency services, so we are honoured to be able to play a small part in helping them to keep drugs and explosives off the streets.

“It’s also another way of utilising the incredible space we have here at the Abergele store, which has been very popular with pets and their owners since we opened in December.

“We have plans to expand further in 2019, and other collaborations in the pipeline, so it’s going to be another big year for us.”