Wanderer returns for one last cuddle 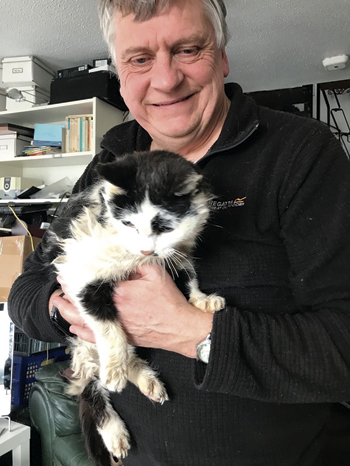 A cat has been reunited with her owner NINE years after she went missing!

RSPCA inspector Gemma Cooper was called to rescue the injured cat from Bridgend, South Wales, and on arrival was concerned about her general health.

“She looked extremely old, was very matted and was wobbly on her legs. I scanned her and to my surprise she was microchipped and so I contacted the details on the chip.
“I couldn’t believe it – she had been missing for nine years and was now 20 years old. When I handed her back to her owner, she recognised him instantly and began to purr. It was certainly a goose-bump moment.”

Named Babsy, the cat was found five miles away from home. She was born in January 1999 and was rehomed by Cats Protection in 2003 to her owner, Mike Marshall.

Gemma added: “We took her straight to the vets as she clearly had problems and unfortunately due to many health issues and her age, it was advised by the vet that she be put to sleep. It is so very sad, but at least she got to be with her owner one last time and he was there at the end.”