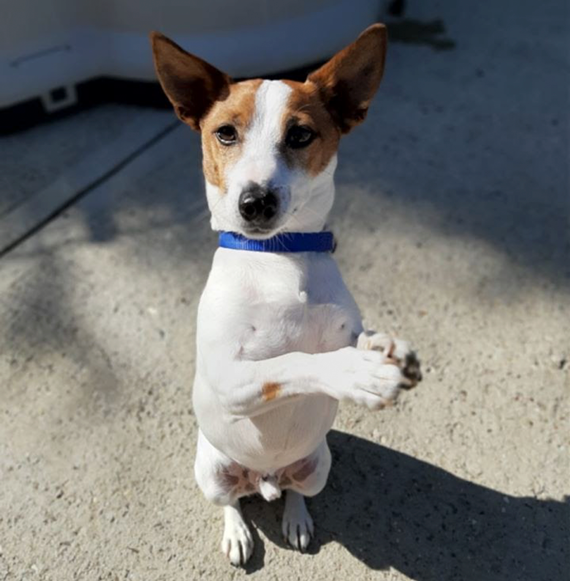 A clever little rescue dog has been joining the nation each Thursday night in the ‘clap for carers’ – a celebration of the work of our NHS heroes and key workers.

Jack Russell Smudge, who is six years old, is currently being cared for at the RSPCA Eau Brink Rehoming Centre in Norfolk after a sad change in circumstances for his previous owners.

He has been at the centre a number of weeks and it was while staff were getting to know him that they discovered his talent of being able to clap.

Penny Skate, chairman of the Norfolk West branch trustees, said: “Smudge is such a clever boy and such a delight to be around.  Every time he’s asked to clap for the carers it really looks like he is putting his heart and soul into it.

“It’s a lovely sight to see Smudge so happy and enjoying himself. We really want to share his video with the country and hopefully Smudge clapping can help to put a smile on people’s faces during these uncertain times.”

Smudge is still on the lookout for a new family. He is a friendly fella with a non-stop waggy tail.

Like animal charities up and down the country, rehoming was paused at the RSPCA Norfolk West Branch due to the coronavirus crisis.

However Defra has approved guidelines, put together by the Canine and Feline Sector Group, to allow animal welfare charities in England to rehome safely during the pandemic.

The RSPCA will now start finding homes for the animals in its care using a new safe rehoming and fostering process – although animal centres will remain closed to the public.