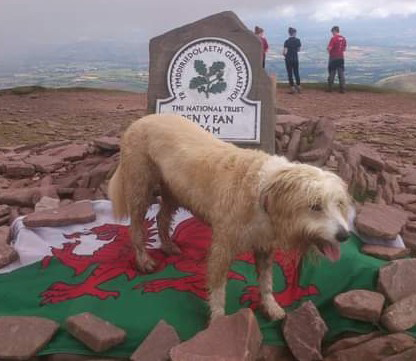 A new book about a loveable rescue dog from South Wales is raising vital funds for animals in need.

‘Stevie the Wander Dog’, whose long, eventful life saw him become a school wellbeing dog, a mountain leader and even an actor, is the star of the book written by owner Hayley Jones.

A donation from every book sold is being made to the RSPCA’s Llys Nini branch, which runs an animal centre in the Penllergaer area of Swansea.

Hayley said: “As Stevie became an older dog, we wanted to do something we could remember him by – and I was so proud to write his amazing story.

“I’d first written the story while on maternity leave, and as the covid-19 lockdown struck, I thought it was time to publish the book and bring a smile to people’s faces.

“The pandemic has been tough for Llys Nini – so if Stevie’s legacy can help them help animals, then I’ll be so pleased.”

Stevie was rescued by the Jones family in 2003 and made his forever home in the Dulais Valley in Neath.

He was exceptionally popular in the local community, and would often attend work with Hayley’s father and local headteacher, Alan Tudor Jones, helping accompany schoolchildren on Duke of Edinburgh Award expeditions to the Brecon Beacons or Gower.

In 2010, he even played Sandy in the musical Annie at Princess Royal Theatre in Port Talbot – and, the following year, toured Europe in a campervan, where he briefly swapped the Dulais Valleys for France, the Netherlands and Spain.

Hayley added: “When my family first got Stevie, I was in my late teens and he was just the most amazing rescue dog. He hated being on his own so we took him absolutely everywhere with us.

“Stevie was just incredible company. He was placid, calm and happy – and we had the most amazing adventures together. Sadly we lost him earlier this year but his 18 years with us lives on in this heartwarming story.

“I’d urge anybody wanting to hear more about Stevie’s mountain expeditions, travels across Europe or school trips to pick up a copy of this unique book.”

Sally Hyman, chair of the RSPCA’s Llys Nini branch, added: “Stevie just sounds the most incredible dog and we couldn’t be prouder that his amazing story is raising money for us.”