Meet the man who snacks on dog treats 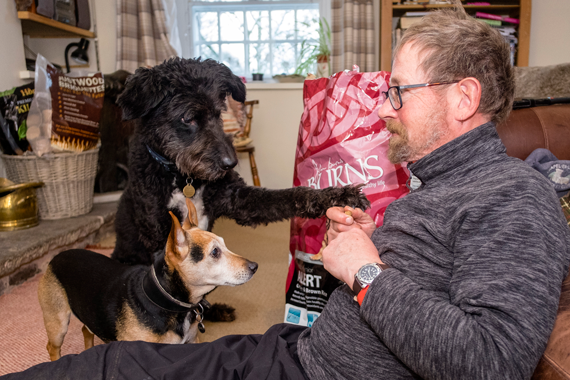 A professional dog walker has developed an unusual way of fighting off hunger pangs while on the job walking dogs in the Peak District.

Nick Pearson, 59, has taken to snacking on DOG treats over human food on his walks after discovering they were made from all-natural, human-grade ingredients.

The former debt advisor, who launched his own dog-walking business in Monyash, Derbyshire, last year, first noticed that his dogs treats – Burns Chicken and brown rice biscuits – were suitable human food after forgetting his own lunch while on a particularly long walk with a group of four of his canine customers. Realising he’d forgotten the sandwich he’d made that morning, Nick decided to give the treats a go after taking a closer look at their ingredients, which included brown rice, chicken meal, oats, peas, seaweed and sunflower oil.

Nick retired from his role as a senior manager at a commercial debt solutions company in October last year and immediately began to secure the relevant training and credentials to launch his own dog walking business, Peak Wags and Woofs. The service, which operates in Buxton, Bakewell and the surrounding villages, now provides walks for 30 dogs throughout the week while Nick also spends his days making house visits to puppies, cats, chickens and guinea pigs.

“It’s amazing to be able to do something that combines two of my greatest loves, dogs and walking, and it’s been great that my own two dogs, Basil and Echo, get to meet and walk with so many lovely and playful dogs,” said Nick.

“I’ve got to walk in some of the most beautiful spots of the Peak District, meet a host of great dogs and their respective owners and even sample some of the dogs’ treats, which were surprisingly tasty! If I was hungry and out on a walk, I’d certainly be happy to snack on a few of the dog’s biscuits again.”

John Burns, a veterinary surgeon and founder of Burns Pet Nutrition, said of Nick’s newly-developed snacking habit: “We were wonderfully surprised when we heard that someone had sampled our original chicken and brown rice recipe and that they had enjoyed it. I’ve sampled a number of our recipes over the years, particularly our Penlan Farm range, which is basically a human risotto using organic brown rice, organic chicken and vegetables.

“It’s great to know that our food is a hit with humans, as well as dogs. All of our recipes use real, high quality ingredients without any pharmacologically-active supplements, designed to let the body get on with what it does best. I’d be interested to hear Nick’s feedback if he get’s round to trying the rest of our range.”