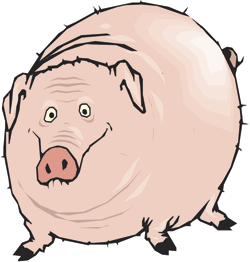 An overweight pig had to be put on a stretcher and taken out of an upstairs flat where it was stuck.

Two-year-old Twiglet, who weighed 30 stone, had been advertised as a ‘micro-pig’ and sold for £60 to grandmother Elaine Edwards in Rotherham, South Yorkshire, who fed her on a diet of Chinese takeaways, chocolate and porridge.

At first, the Vietnamese pot-bellied pig was tiny but she soon ballooned to be larger than a baby elephant, reported the Metro.

When Elaine, 57, died, her family were unable to bring Twiglet out of the flat because she was ‘too nervous’ to get down the stairs. In the end, they had to call the fire service.

Twiglet was sedated before six firefighters loaded her on to a stretcher and manouvered her down in an operation that took three hours.

Elaine’s granddaughter, Calli Edwards, 20, said: “Twiglet had her own single bed in my nan’s room with her own teddies – that was life for Twiglet.

“She got everything she wanted. She was my nan’s world.”

Twiglet was taken to Peppers Field Equine & Poultry Rehabilitation Centre in Letwell and has since lost a stone-and-a-half after switching her diet to animal feed.