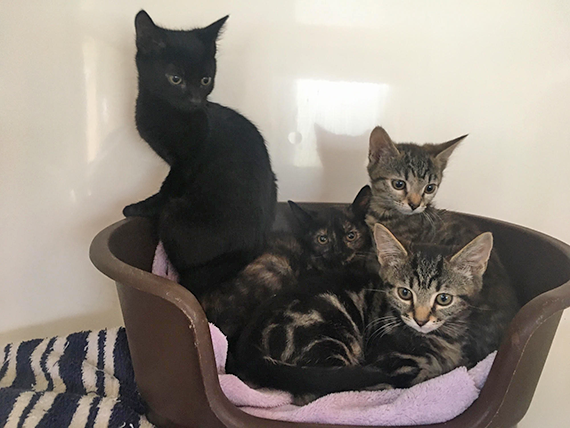 The RSPCA is ‘bracing for an influx of unwanted kittens’ coming into its care.

Kitten season, when most litters of kittens are born, runs from May to September, and often sees charities overwhelmed with cats and kittens coming into rescue centres.

Cats were the second most rescued animal by the RSPCA in 2020, with its centres and branches taking in 22,360 felines.

Last year the charity also dealt with 9,633 abandoned cats and at this time of year, sees lots of abandoned kittens sometimes found in cardboard boxes, in bins, or by roadsides as their owners could no longer care for them or weren’t expecting a litter.
RSPCA’s cat welfare expert, Alice Potter, said: “Charities like the RSPCA are often left picking up the pieces of kitten season with lots of cats and kittens coming into our care.

“Some of the mums and their litters coming into our care are stray cats which are picked up by our officers but what we see all too often is unexpected litters of kittens being abandoned or given up because their owners didn’t plan on their cats getting pregnant and realise they can’t cope. Kittens may look cute but they are very complex and expensive to care for.

“With an estimated 70% of litters being unplanned, this means rescue centres can fill up very quickly. This situation has been unfolding for several years but we’re concerned that the lockdown could have made the plight of unwanted kittens even worse.

“There has been a real surge in demand for pets during the lockdown with 3.2 million homes taking on a new pet since the pandemic began. However, once people’s lives go back to normal this summer we are concerned that those who purchased a kitten on impulse may find that they’re struggling to cope with them.

“The concern is that all those people who have bought a cat or kitten during the last year will have struggled to get them neutered as many vets have, understandably, had to prioritise emergencies to reduce to safeguard staff and clients. This means we are worried that there will be lots more cats out there having kittens this kitten season.”