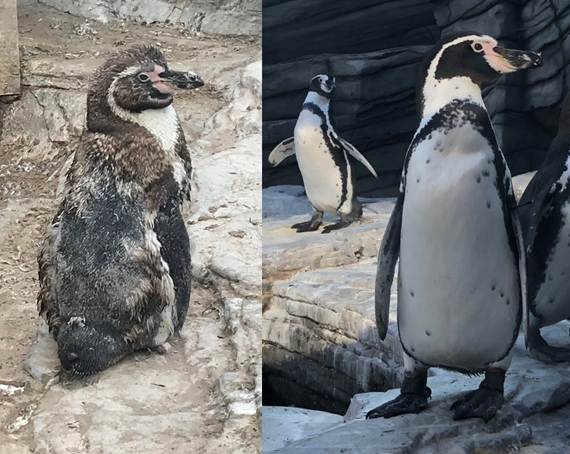 Humboldt penguins at an aquarium have been heralded as ‘body positivity’ icons by staff after they remained on show despite going through their annual moult – which means the usually feathered friends are now bald birds.

Each year, the petite penguins shed their plumage ahead of re-growing their striking coats in time for the cold winter.

While they’re without their usual feathers, the penguins become less active and retain more fat than usual in order to stay warm and safe, meaning the group can appear a little bedraggled and glum, especially when compared to their usually preened plumage and typically boisterous behaviour.

Terri Harris, general manager at SEA LIFE Great Yarmouth, said: “Our team has noted an increase in guests reporting that the penguins appear in need of urgent extra attention. However, we’d like to reassure visitors that our penguins are simply shedding their coats as many animals do each year and will be on perky-penguin form again soon.

“We appreciate that the penguins aren’t as pretty as usual but, rather than move them to a private enclosure, we felt it was important to keep them on show as ‘body positive’ penguins – demonstrating a natural part of their annual routine and teaching visitors about a little-known period of a penguin’s life.”

The Great Yarmouth site reopened in July with extensive safety measures in place.