Pussyfooting around the pitch 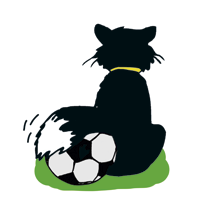 A black cat disrupted a Premier League game by invading the pitch.

The match, between Everton and Wolves, at Goodison Park, was suspended for several minutes.

Final Score reporter John Acres filled nearly two minutes with his commentary on the cat, saying: “It looks like a fully grown cat. He drops a shoulder, jinks one way, goes another” and “The steward’s after the cat, but the cat knows it and puts in a turn of pace…”

Eventually play was able to resume with referee Lee Mason adding seven minutes of injury time at the end of the game.

Despite his side’s win, Wolves’ boss Nuno Espirito Santo was not happy with the  interloper. He said: “Where I come from, the black cat is bad luck so I never want to see cats again. I don’t like black cats.”