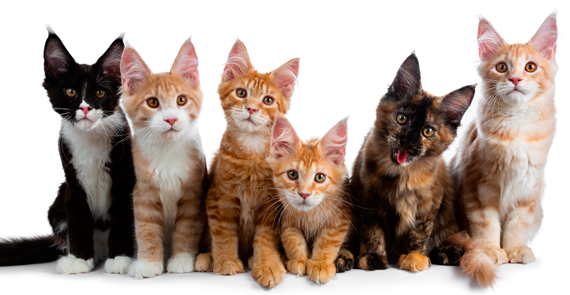 Maine coons are among the most expensive breeds with kittens costing more than £1,000 each

The UK’s 22 most exclusive cat breeds have been revealed – and cat lovers will need deep pockets to own one.

A team of personal finance experts from TheMoneyPig.com have looked at the average cost of buying some of the special breed kittens, and found that some come with a price tag of up to £1,300.

Persian, Oriental and Cornish Rex kittens are worth between £640-£670, but other popular breeds such as Bengals and Maine coons can cost more than £1,000.

The most expensive cat on the list is the unusual-looking Lykoi. It’s also known as the ‘werewolf cat’, with kittens selling for around £1,300.

A spokesperson for The Money Pig said: “When it comes to cats and kittens, certain qualities and characteristics set a handful of breeds apart – you couldn’t confuse the ‘naked’ Sphynx with a fluffy Persian, for example – and it’s these features that entice cat lovers to shell out hundreds or even thousands of pounds.

“We worked out an average price to buy the most sought-after kittens, but because of certain colourings or genetics, some examples of each breed might cost much more.”

Breed   (average price for one kitten)