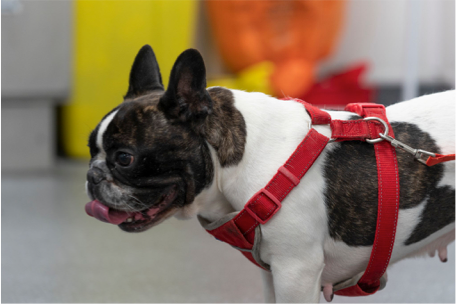 The RSPCA is seeing a growing number of French bulldogs coming into its care as owners struggle to take care of them due to complications and expenses caused by bad breeding.

In 2020, the RSPC A took in more than 6,500 dogs with the majority going into the charity’s network of branches and 1,242 moving into its 14 animal centres across England and Wales.

Analysis of those 1,242 dogs, by breed shows a shifting trend in the types of the dogs the charity is seeing coming into care, with the number of Staffies and Staffie crosses – although still accounting for the highest number in total – declining over the years, while the number of breeds such as French bulldogs increases.

RSPCA dog welfare expert Dr Samantha Gaines said: “We seem to be seeing the same shift in the trends of ownership and popular breeds among the dog-owning population being reflected in our rescue population which means while the number of Staffies, lurchers and crossbreeds seem to be declining, the number of French bulldogs are really increasing and, although small in numbers, cocker spaniels and Chihuahuas seem to be growing, too.

“We suspect this is as a result of the surging demand for increasingly popular breeds like Frenchies fueling bad breeding practices and the puppy trade. Unfortunately we’re also seeing an increase in the number of dogs like French bulldogs – with brachycephaly (shortened muzzle/flat faced) – coming into our care because their owners cannot afford their vet bills.”

As a member of the Brachycephalic Working Group, the RSPCA is urging people to stop and think if they want to buy a flat-faced dog and to consider an alternative breed or crossbreed with a lower risk of health problems.