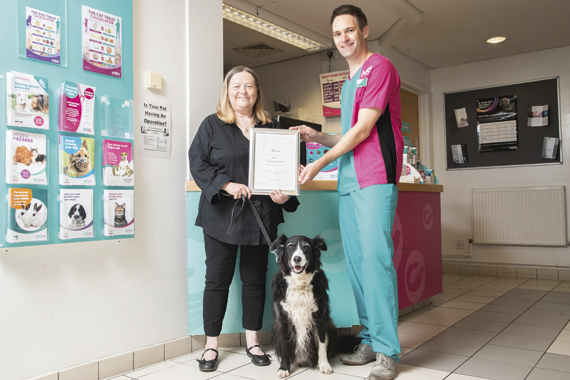 A 13-year-old Border collie from Leicester is being honoured by the PDSA after helping his owner collect more than 7,500 bags of litter.

For the past nine years, Nita Pearson, 66, and her dog, Woodie, have spent more than two hours each day picking up discarded rubbish, including beer cans, coffee cups and sweet wrappers, to bin and recycle near their home in Thringstone.

Nita adopted Woodie from a rescue centre in 2010 and he has been a loyal companion ever since.

She said: “I have been litter picking for many years and Woodie joined me as soon as I got him. It has been really good for Woodie, he was very nervous at first but has made lots of friends during our daily litter picks.
“We will go out whatever the weather, even on Christmas Day.
“We are both passionate about keeping our village tidy and between us, we pick up more than 70 bags of rubbish a month.”

As well as daily litter picks, the duo have given talks to local schoolchildren about the importance of looking after the environment.

Woodie was presented with the award by charity vet Robert Haselgrove at a ceremony at Leicester PDSA Pet Hospital.

He said: “We are so impressed by his dedication to keeping his village tidy, while engaging with other members of the community. Woodie has been a true companion to Nita and we hope his efforts will inspire other pets and their owners to take pride in their local communities.”