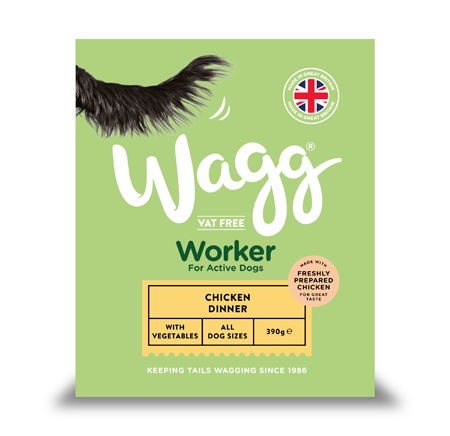 Inspired Pet Nutrition, the UK’s largest independent producer of dry pet food, has for the first time launched a wet dog food under the Wagg brand.

Chris Wragg, marketing director at IPN, said: “This exciting new range is a result of both innovation and manufacturing expertise, combined with probably the most well-invested pet food business in the UK.

“Some £14 million has been invested in new facilities in North Wales and the launch expands the Wagg proposition of ‘no nonsense, great quality and value’ into the fast-growing tray sector of the wet market.”

This will be its first venture into the wet food sector, where growth is being driven by the plastic-tray format with overall branded annual sales more than doubling to over £24m in the past two years, according to Nielsen.

There are four flavours in the new range – salmon, chicken, beef and turkey – available in 390g trays.. The trays will be an addition to the VAT-free Wagg Worker range.

The first three flavours will be on shelf in Morrisons this week with an RSP of 90p.  Further listings in the multiples are planned along with a roll-out to retail channels in the pet trade.