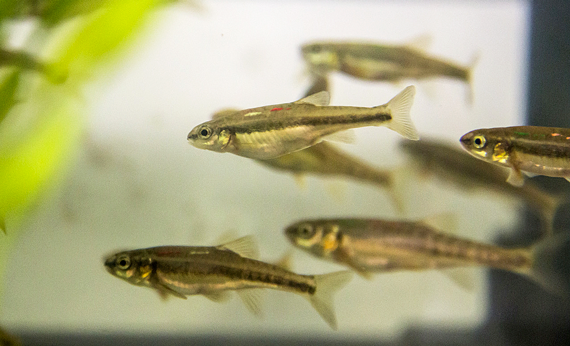 Climate change could leave freshwater fish with bigger brains but a reduced ability to effectively explore their surroundings, scientists have found.

In order to survive, the world’s aquatic life will need to adapt to the warmer waters that global warming will produce in the coming decades.

New research by University of Glasgow biologists suggests that the physiological changes fish will undergo in warmer rivers might require them to trade brains for brawn, with potentially challenging consequences.

In order to test how living in warmer waters might affect cold-blooded freshwater fish, researchers from the University’s Institute of Biodiversity Animal Health & Comparative Medicine fished minnows from the river Kelvin, close to the university, and split them into two groups.

One group of minnows was raised in tanks filled with water kept at the river’s usual temperature of 14°C. The other spent their time in tanks heated to 20°C, at the higher end of the temperature range climate scientists expect the river could reach by the end of the 21st century.

Over the course of eight months, the researchers paid close attention to each minnow’s physiology and behaviour, and watched how they interacted with their environment.

Measuring the minnows’ oxygen consumption at rest and during exercise showed that the fish in the warmer tanks used more energy in both states, suggesting their metabolisms had ratcheted up as they adapted to the heat.

The researchers also observed that the minnows from the 20°C tanks developed bigger brains than their cooler counterparts. However, despite their bigger brains, they performed significantly worse in a test designed to measure their ability to navigate and find food.

They struggled to navigate a maze to reach a mealworm and, even though they had four attempts to learn the layout of the puzzle, their performance did not improve with repetition.

Dr Libor Zavorka, the paper’s lead author, said: “While the minnows we studied were able to adapt to live in the warmer water, their reduced ability to find their way around in order to catch food does raise some questions. Although we found their brains were larger, they seemed less able to accomplish the simple tasks that minnows carry out every day.

“As their metabolisms increase to cope with the larger brains and the increased temperature of the water, they will need to eat more to fuel their bodies – but if they are less able to find food efficiently, they will need to spend more energy looking for it.”

Professor Shaun Killen, head of the research group which produced the study, said: “We chose minnows for this study because they’re a useful model species, found in many places across the northern hemisphere across a broad range of temperatures.

“Surprisingly, this research is the first real study of how fish physiology, brain structure and behaviours might be affected by the warming of their habitats.

“Our findings suggest that disrupting the delicate balance between the minnows’ physiology and their environment causes some unexpected side-effects. We’re keen to extend our research further to explore the potential outcomes for freshwater fish in the increasingly challenging environments they will face in the future.”